Adventures of Pinocchio, The [Ilustrated with Interactive Elements] (Hardcover) 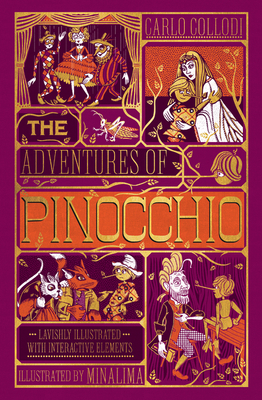 By Carlo Collodi
$32.50
Unavailable from our store

The enduring children’s tale The Adventures of Pinocchio, retold for a new generation in this spectacular full-color deluxe gift edition, packed with beautiful artwork and seven interactive features created by the award-winning design studio behind the graphics for the Harry Potter film franchise, MinaLima.

Originally published in 1883, The Adventures of Pinocchio is one of the best known and beloved children’s classics. Written by Italian political satirist Carlo Collodi, it is the story of Geppetto, a poor puppeteer who uses an enchanted piece of wood to carve a marionette boy he calls Pinocchio.

The impish Pinocchio does not want to be a puppet; he yearns to become a real boy. Soon, his curiosity, mischievousness, and naivete lead him away from his father’s shop and into a series of perilous encounters with vicious puppet masters, cunning animals, and other magical characters. Along this perilous journey, the magical puppet learns how much turmoil, heart, and hard work it takes to become a “real boy.” With a nose that grows larger with each lie he tells, Pinocchio has become an enduring icon in children’s literature, and now his story is brilliantly reimagined in this stunning gift edition.

The Adventures of Pinocchio includes specially commissioned artwork and exclusive interactive features, including:

This wondrous edition will enchant readers of every age an become a treasured keepsake passed down for generations.

Carlo Collodi is the pen name of Italian author Carlo Lorenzini, creator of the beloved children’s character, Pinocchio. A Tuscan who fought in Italy’s wars of unification, Collodi was already a famous novelist and popular translator of French fairy tales when he began to contribute chapters in the life of a marionette to Italy’s first newspaper for children, Il Giornale per i Bambini. The adventures of the disobedient puppet were an immediate success and Pinocchio’s story has been translated and adapted numerous times, including the classic 1940 animated production from Walt Disney. Collodi died in 1890.

This feature require that you enable JavaScript in your browser.
END_OF_DOCUMENT_TOKEN_TO_BE_REPLACED