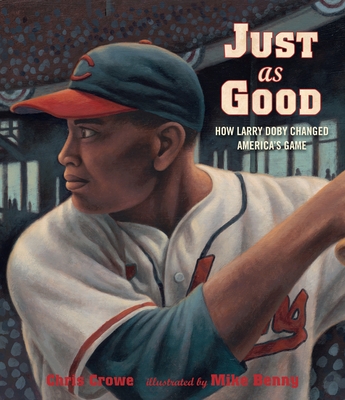 In 1948 a black family eagerly follows the World Series as the first African American in the American League helps his team win. Lush, acrylic illustrations (7-9).

Batter up for the first-ever children's book about Larry Doby, the first African-American player to hit a home run in the World Series.

The year is 1948, and Homer and his daddy are baseball crazy. Ever since last season, when their man Larry Doby followed Jackie Robinson across baseball’s color line and signed on with their team, the Cleveland Indians, it’s been like a dream come true. And today Larry Doby and the Indians are playing Game Four of the World Series against the Boston Braves! With a play-by-play narration capturing all the excitement of that particular game — and the special thrill of listening to it on the radio with family at home — Chris Crowe and Mike Benny craft a compelling tribute to an unsung legend. Kid-friendly and vividly illustrated, this long-overdue biography, featuring an extensive bibliography and historical note, illuminates the effect Larry Doby had on his fans as both a baseball hero and a champion for civil rights.

Chris Crowe has written several celebrated books for young people, including Mississippi Trial, 1955, which won the International Reading Association Young Adult Book Award, and Getting Away with Murder: The True Story of the Emmett Till Case. Chris Crowe is a professor of English at Brigham Young University and lives in Provo, Utah.

Mike Benny is an award-winning illustrator whose work has appeared in many prominent publications, including The New Yorker, Time, Sports Illustrated, and Rolling Stone. He has also illustrated several picture books, including Oh, Brother! by Nikki Grimes and The Listeners by Gloria Whelan. Mike Benny lives in Austin, Texas.

Like many fans, Homer and his father switch on the radio to listen to Doby’s big game, which JUST AS GOOD recreates play-by-play with Benny’s lush acrylics.
—The New York Times

A straightforward but nonetheless inspirational story of barriers being broken down, one slow step at a time.
—Publishers Weekly

Crowe's story captures a slice of baseball life for a family enjoying the old-time radio play-by-play and seeing in Doby's accomplishments a sign of better times to come. Benny's full-page acrylic paintings are cheery and portray a comfortable home setting... A fine story about baseball that makes its point quietly and effectively.
—Kirkus Reviews

With an author’s note that fleshes out Doby’s historical significance, this nostalgic picture book frames Doby’s on-field heroics with a story of a father and son listening on the radio as Doby launches a game-winning home run in the World Series... A sage reminder that though the first step might be the hardest, the second is no less important.
—Booklist

A compelling look at one of the game's trailblazers.
—School Library Journal

Baseball fans will enjoy this book with its oversized paintings of Doby in action.
—Library Media Connection

This wonderful picture book tells the simple story of a boy and his dad listening to that game on the radio in their kitchen and realizing that they were listening to history being made.
—Washington Post

The father-son relationship, a family's pride and an almost forgotten moment in the civil rights struggle are recalled with an assist from rich acrylics that capture a pivotal moment.
—San Francisco Chronicle

This feature require that you enable JavaScript in your browser.
END_OF_DOCUMENT_TOKEN_TO_BE_REPLACED