I Learn from Children: An Adventure in Progressive Education (Paperback)

END_OF_DOCUMENT_TOKEN_TO_BE_REPLACED 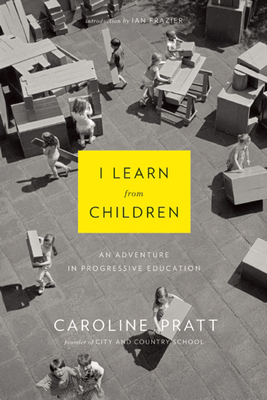 By Caroline Pratt, Ian Frazier (Introduction by)
$16.00
On Our Shelves Now

"A lucid presentation of what progressive education can accomplish."--The New York Times How should schools prepare students for the Information Age? The successful worker of the future - a creative, independent thinker who works well in teams--would seem to be too self-contradictory to be the deliberate product of a school. A century ago, the American educator Caroline Pratt created an innovative school that she hoped would produce such independent thinkers, but she asked herself a different question: "Was it unreasonable to try to fit the school to the child, rather than . . . the child to the school?" A strong-willed, small-town schoolteacher who ran a one-room schoolhouse by the time she was seventeen, Pratt came to viscerally reject the teaching methods of her day, which often featured a long-winded teacher at the front of the room and rows of miserable children, on benches nailed to the floor, stretching to the back. In this classic 1948 memoir, now in its fourth edition, Pratt recounts, in a wry authorial voice much closer to Will Rogers than John Dewey, how she founded what is now the dynamic City and Country School in New York City; invented the maple "unit blocks" that have become a staple in classrooms and children's homes around the globe; and came to play an important role in reimagining preschool and primary-school education in ways that resound in the tumultuously creative age before us. This edition features a new introduction by Ian Frazier, as well as additional commentary, and an afterword.

Caroline Pratt (1867-1954) was the founder of City and Country School, a path-breaking progressive school for children to the age of thirteen. She poured a lifetime of experience into I Learn from Children.

This feature require that you enable JavaScript in your browser.
END_OF_DOCUMENT_TOKEN_TO_BE_REPLACED