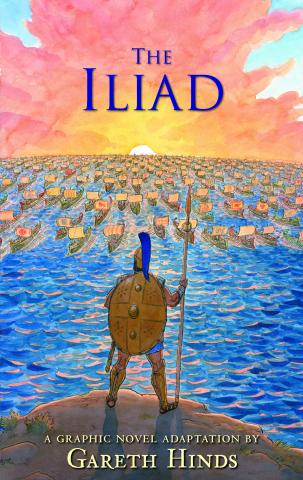 In his latest graphic novel adaptation of a classic text, Hinds (The Odyssey) condenses Homer’s epic poem of gods and mortals at war, covering most of the major events and adding supplemental material that expands the story slightly beyond the original...The most striking scenes are the battles, presented in intimate detail and in awe-inspiring, sweeping overviews. Hinds’s relatively plain language retains just enough meter to hint at the cadences of the work, and, together with the dynamic art, creates an accessible entrée to an enduring classic.- Publishers Weekly (starred review)

Clear scaffolding, well-chosen abridgements, readable prose, and stunning art invite readers into this exceptionally compelling version of the episode of the Trojan War handed down through Homer’s Iliad...Readers who have struggled to follow the poetry of the standard text or to become emotionally invested in a summary will have no such difficulty here; Hinds has truly produced an easy-to-follow, engrossingly cinematic blockbuster on the page. - Bulletin of the Center for Children's Books (starred review)

"Sing to me, O Muse, of the rage of Achilles": a rousing graphic rendition of Homer's great epic...An expertly crafted rendition and a welcome invitation to younger readers to immerse themselves in the ancient past. - Kirkus Reviews

This is no mere comics adaptation of an ancient classic. Through his intricately illustrated panels, Gareth Hinds brings us The Iliad’s depth, brutality, and power. A Herculean effort worthy of the original. - Gene Luen Yang, Michael L. Printz Award winner for American Born Chinese

With his graphic novel retelling of The Iliad, Gareth Hinds has created a work of such scope and power that it boggles my mind. It truly lives up to the — dare I say it — epic scale of the original poem. - George O’Connor, author of the New York Times best-selling Olympians series

This feature require that you enable JavaScript in your browser.
END_OF_DOCUMENT_TOKEN_TO_BE_REPLACED